The Christmas season has become tough for me. There are so many great things about this season, but for me, the tough part is all of the great deals. I want to be generous and give my whole family and their friends presents, but I’ve found that there is a fine line between being generous and encouraging materialism. Not to mention all the nice things that I could buy for myself!

George Carlin used to do a bit called ‘A Place For My Stuff,’ and in his book Brain Droppings he said,

When my wife and I watch TV we are bombarded with messages that tell us that we don’t have enough money, a good enough phone, a nice enough car or a big enough house to be content. When we use Instagram and Facebook it’s easy to believe that our lives aren’t as cool, fun and exciting as other peoples. So we think we need to buy more ‘stuff’ we can’t afford, and buy a bigger house that has shiplap and an open layout (I think I’ve watched too much Fixer Upper). 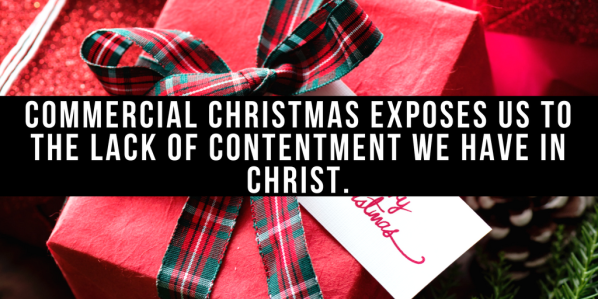 It makes me think about the difference in how the early church treated their friends and neighbors. In Acts 4:34-35 it says, ‘There was not a needy person among them, for as many as were owners of lands or houses sold them and brought the proceeds of what was sold and laid it at the apostles feet, and it was distributed to each as any had need.’

The early Christians understood how inconsistent it was to collect stuff in large houses when their brothers and sisters were struggling to find food, to pay bills, and/or couldn’t afford shelter. The struggle for them was all about how they can make other peoples lives better, just like Jesus did for them.

If they really believed in Jesus, then they couldn’t follow Him and still hold onto the ‘stuff’ they had.  They counted the cost of what it takes to follow Jesus, and found contentment in Him rather than their possessions.

How firmly are we holding onto the ‘stuff’ we have?

Commercial Christmas exposes us to the lack of contentment we have in Christ.

The real Christmas was about sacrifice. Jesus becoming human was the beginning of a lifetime of sacrifices that results in our newness of life.

Have I really counted the cost of following Jesus? Have you?